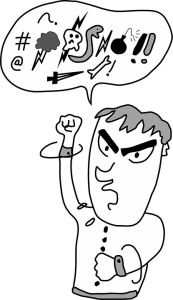 Netflix’s “Orange Is The New Black” fails to mention an important color in the series’ title–blue. Yes, blue as in the characters in the show (inmates, guards, administrators, family members, etc.) cussing a blue streak. I am totally hooked on this show which addresses cutting edge societal issues, but at the end of every episode I feel like my ears have been assaulted. Unfortunately, the show simply reflects how our society is today, i.e., it’s not polite.

Growing up I led a fairly sheltered existence. I NEVER in my life heard my parents or any of their friends use foul language. Of course, that meant I did not use that type of language either. I was expected to look, act, and speak like a lady.  I got into trouble if I dared tell my sister or brother to  (GASP!) “shut up.”

Becoming a military “dependent” when I married did broaden the types of language to which I was exposed. Ironically, military members are some of the most polite individuals you will ever meet. You are always addressed as “ma’am” or “sir.” Once I conducted a consultation in my office with a female military member. I thought I would scream if she addressed me as “ma’am” one more time. I mean every sentence she spoke during our hour and a half meeting contained that word.

But military members can flip off that language switch producing polite addresses and shoot off a barrage of quite colorful language. Stereotypically it is sailors who turn the air around them blue (perhaps to match the ocean?), but let me assure you that the Air Force, Army and Marines can be proficient in spewing foul language as well.

Although the military may be the worst offenders when it comes to exploding expletives around others, they are able to rein in their words. Even the roughest of the rough is expected to show restraint in the presence of superior officers, women, and children. If you can resist the urge to cuss in some instances, then flex that restraint muscle more.

Why do people feel the need to speak with “potty mouth?” Various theories have been put forth in explanation. First, cussing can serve as an anger management technique. Yes, I suppose it is better to let an “f bomb” fly in someone’s presence than to hit him in anger. But is that the BEST anger management technique to use? Pretty sure Mom would answer a resounding, “NO!”

Cussing may be viewed as an indication that the speaker is being honest and real. If he doesn’t filter his words, then he is probably not taking the time to doctor up the facts. Feeling comfortable enough to cuss around someone may also generate a spirit of camaraderie. But then, maybe we should be more selective of with whom we associate. How about connecting with  “speak no evil” folks?

On a practical level, cussing may lessen physical pain. Stubbing one’s toe or hitting one’s thumb with a hammer would be a common time for cussing to occur. According to a British study, saying any commonly used expletive can work to reduce physical pain. Wouldn’t it be better to just pay more attention to what you are doing so you don’t have an accident requiring vulgar language to cope with the resulting pain?

Admittedly, we all slip up at one point or another. My husband spent twenty years serving in the U.S. Air Force, but he would watch his mouth around the kids. Two of our favorite family stories are set in situations where a cuss word was trying to slip out. Good saves occurred when hubby blurted out “shitake mushrooms” and “jack-o-lantern” thereby avoiding words not suitable for young ears. Fortunately, he had a better outcome than Ralphie did in “A Christmas Story.” As the movie narrator explains, Ralphie uttered “Fuuuudge”–only he didn’t say “Fudge”.

In the past parents, such as Ralphie’s, turned to washing a child’s mouth out with soap when bad language was used by a little darling. That punishment would undoubtedly be considered child abuse today. In any event, there’s probably not enough soap on the shelves at the local grocery store to get rid of the rampant revolting language that is commonly heard in public, in music, in movies, etc. today.

But foul language is not an issue that has just reared its ugly head. Back in the early 70’s, George Carlin delivered a monologue called “Seven Words You Can Never Say On Television.” Certainly there were more than seven words that were taboo, but I am guessing that seven was an attractive number. I mean there are seven deadly sins, so why not seven do not speak cuss words? George should have taken the hint that these words were not to be publicly spoken, but alas, he did not. Instead he performed this routine publicly at a music festival in Milwaukee in 1972 and was promptly arrested for disturbing the peace. Hmm. No assault (on the ears) charge?

Use of foul language found a wider audience on a bigger stage during the last presidential election. Trump’s declaration that he would make America great again clearly did not refer to clean speech. After publicly letting fly some choice words that Carlin would characterize as ones that can never be said on television, Trump finally reconsidered. He announced at a political rally in Baton Rouge that “I won’t use foul language.” Maybe he was misquoted and that was “fowl” language. But he’s both squawked and cussed since then.

Whether it is a comedian, POTUS, a military member or John Q. Public, foul language is neither polite nor the best choice of words. Humans are high level thinkers and don’t have bird brains. So why don’t we all agree to engage our brains before opening our mouths? Leave foul (and fowl!) language to the birds. To quote a favorite line from Season 6 of OITNB–“Bulltrue!”

JUST WONDER-ing:  How do you feel when someone uses foul language in your presence? Do you think less of someone who resorts to foul language to express his thoughts and opinions? Is the use of foul language ever appropriate?

10 thoughts on “Foul Language Is For The Birds”