Geography was never that exciting a subject to me. I mean, isn’t it all about studying maps and learning about the earth’s surface? Yawn. As a political science major in college, I thought taking political geography might be interesting. Double yawn. But there is one type of geography which I can get passionate about–gastronomic geography.

Never heard of that subject? Neither had I. As a matter of fact, I just made the phrase up after my recent trip to Budapest, Hungary. There’s much to be said for learning about a country based on taste. Yup. That’s an approach that you can really sink your teeth into–literally and figuratively.

As a first time visitor to Hungary, I noticed that the country has some things which remind me of home. To no one’s surprise, the most apparent reminder  was a food establishment. I mean, is there anywhere in the world that McDonald’s isn’t located? Lest you think that a meal at the golden arches in a foreign land is the same as one back in the good old USA, let me set you straight.

Apparently the current and heavily advertised specialty sandwich at McDonald’s in Hungary is the Goosey Gustave. Sure it’s a hamburger, but it is not the type of hamburger Americans eat. The sandwich does not come with special sauce, but it does have some special ingredients–two juicy slices of grilled foie gras. For those who are fine dining challenged, you should be aware that foie gras is fat goose liver. Hungary is the largest exporter of goose liver in the world, so it should come as no surprise that they use foie gras in their food. But in a fast food hamburger??? SMH.

The first floor of the Central Market Hall in Budapest is a produce shopper’s paradise. A quick walk through this vast shopping venue leaves no doubt that paprika reigns supreme in Hungary. Strings of the peppers hang everywhere, decorating the market area like tinsel on a Christmas tree. Bags of paprika of various varieties (hot, sweet, smoked, etc.) are artfully packaged in red, green and white bags (the colors of the Hungarian flag) to attract a shopper’s eyes and hopefully his money.

Not only is Hungary a major supplier of commonly-used paprika, but that spice is also the signature spice of Hungarian cuisine. My taste buds were tickled by the use of paprika in goulash soup and chicken paprikash which I consumed while in the Hungarian capital. Paprika is also an ingredient in Liptauer, a Hungarian cheese spread which I made prior to leaving on my trip. So pervasive is this red spice in Hungarian cooking that I am apt to believe that the red in the Hungarian flag stands for paprika rather than for blood shed for the country.

When tourists in Hungary aren’t saying cheese taking a gazillion selfies, they are often sampling Hungarian cheese. Probably the most popular cheese in Hungary is Trappista, a traditional Hungarian semi-hard cow’s milk cheese. This cheese is heavenly, and not just because it is made by Trappist monks.  Hungarians use turo, or cheese curd, to make cheesecake. Good thing the Turks were booted from the country after 150 years of occupation; they used to collect taxes partially in cheese. After trying both the Trappista  and cheese curd cheesecake, I would gladly hand over currency in lieu of Hungarian cheese. But we can’t be too hard on the Turks since they brought paprika to Hungary.

The Turks controlled central Hungary for about 150 years. Their influence can clearly be seen on the country’s eating habits. Budapest is teeming with Turkish eateries including the pervasive Doner Kebab Express. In fact, the first lunch I ate in Budapest was at a Turkish restaurant. Nothing says Hungary like a gyro. Or is that hungry? Pork is also common in Hungarian dishes thanks to the Turks. During their raids, the Turks carted off domestic animals such as cows and sheep but observed a hands off policy for pigs; pigs were left behind because the Turks’ religion forbid the eating of pork. Hungarian food clued me into the impact of the Turks in Hungary; that impact was a bit surprising to me since Turkey does not border Hungary.

Sadly, my trip to Hungary had to come to an end. But I was not sad that I had the opportunity to sample the beloved street pastry kurtoskalacs on my last day in Budapest. The sweet treat, known as a spit cake or a chimney cake, is cooked on a spit over an open fire. The sugar coating attracts bees, and the cooking cake’s aroma attracts customers. The spiral cylinder (which resembles a chimney, hence the name chimney cake) can be filled with ice cream or other treats to enhance the sweet experience. I chose chocolate ice cream as my filling. I figured if the Hungarian pastry wasn’t my cup of tea, I’d still enjoy the ice cream. Yum! Double jackpot!! 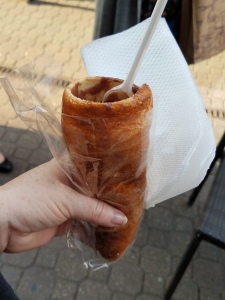 All this food sampling paid educational dividends, although it probably added to my waistline as well. I’ve learned that Hungary is a big exporter of paprika and goose liver, that the Hungarians love cheese (albeit different cheese than Americans use), that there is a Turkish influence on Hungarian cuisine despite Turkey not bordering Hungary, and that both Americans and Hungarians love sweet treats, especially if ice cream can be added.

I am a firm believer that gastronomic geography is the way to go. Why I can feed my brain and my belly at the same time. Forget the maps to study geography. Just pass me a menu!

Just WONDER-ing: Do you enjoy sampling the food of another country when you travel? Does the culinary experience teach you anything about the country you are visiting? Do you remember meals in a foreign country more than facts about that country?