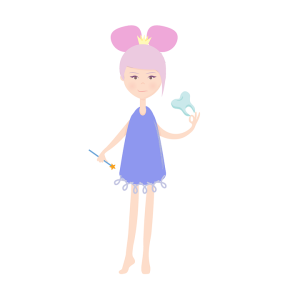 The mysterious creature sneaks into your house while everyone is sleeping. She quietly enters the bedroom of your innocent child and approaches him closer and closer. Reaching quickly towards the child’s head she (GASP!) pulls a tooth out from under his pillow and replaces it with paper currency or a small treat. What kind of horror movie is this? It’s not. It’s the beloved tradition of the Tooth Fairy.

Many years have passed since the Tooth Fairy interacted with my family. But now that my grandson is six, she’s BAA-AACK! And it appears that she’s a little rusty as well. With shoulders drooping, Liam informed his mother that the Tooth Fairy hadn’t come to get the first baby tooth he lost. OOPS! Fortunately, the Tooth Fairy got up to speed while Liam was getting dressed for kindergarten; cleverly, she had put the money left in exchange for the baby tooth in the pillow case.  Good save, Tooth Fairy!

In case you grew up under a rock here in the U.S., let me fill you in on the fantasy figure we refer to as “The Tooth Fairy.” This creature is found in Western (or Western-influenced) cultures. The Tooth Fairy’s job is a simple one: take the baby tooth placed under the pillow by the child who lost it and exchange it for a small gift or money. Unlike Santa, there’s no concrete description anywhere of what the Tooth Fairy looks like or wears. In fact, we don’t even know if the Tooth Fairy is a he or a she, although a poll determined that most people think the Tooth Fairy is a she.

Sadly, my research turned up no answers to these questions, but I did learn some interesting facts about the Tooth Fairy. I know you are CHOMPING at the bit to hear them, right?

According to author Michael Hingston, every recorded human culture has a tradition regarding the disposal of a child’s lost baby teeth. Northern Europeans observed the tradition of paying a tooth fee when a child’s first tooth was lost. Nevertheless, the most widely practiced ritual is one in which lost baby teeth are offered to a mouse (La Petite Souris in France) or a rat. The hope is that the child’s adult teeth will come in as big and strong as a rodent’s. YUCK! Give me the Footh Fairy over a rodent any day.

The idea of a Tooth Fairy is one that is comforting to parent and child alike. The child gets a treat in a time of pain and loss. Yes, the loss of a baby tooth can be traumatic’ my daughter cried hysterically when she lost her first tooth thinking something was wrong. The parent is also traumatized when faced with a child in pain and the reality that their child is no longer a baby but is growing up. The Tooth Fairy makes the growth milestone more pleasant since the child is treated and the parent is relieved that the child is not so grown up that he doesn’t believe in the Tooth Fairy.

The Vikings didn’t care about kids losing their baby teeth. They were concerned about saving their own skin. In Norse culture, children’s teeth were said to bring good luck in battle; thus, Scandinavian warriors would wear children’s teeth on a string around their necks. Nope, that’s not a child-friendly tradition.

According to a website maintained by Colgate, a company that knows a little something about teeth, the Tooth Fairy legend is believed to have originated in the U.S. in the early 1900’s. The concept soared around the time that Disney began releasing pictures about fantasy figures such as Pinocchio and Cinderella.  A study conducted by Rosemary Wells, a professor at Northwestern Dental School, found that the Tooth Fairy was viewed positively or neutrally by 97% of parents. What parent would be against a fantasy figure bringing their child money? I mean, really….

The Tooth Fairy is such a positive figure that the Royal Canadian Mint issued Tooth Fairy quarters. These special edition coins were only produced in 2011 and 2012. Now that would be a cool gift to leave a child under his pillow in exchange for a baby tooth–a Tooth Fairy Quarter from the Tooth Fairy.

Parents need to be prepared to carry out the role of the Tooth Fairy. Their little darlings will begin loosing baby teeth between the ages of 5 and 7. A total of 20 will be lost. Thus, they better start stashing away money for a Tooth Fairy fund as well.

What’s the going rate for a baby tooth today? Interestingly, Delta Delta found that the value of a lost tooth is closely related to the U.S. economy. What the Tooth Fairy shells out each year is a good barometer of the economy’s direction. Over the years, of course, the amount paid out has increased. According to Forbes.com, between 1900 and 1973, the average payout for a baby tooth rose from 12 cents to 85 cents. Most kids find tooth payouts to be between $1 and $5, but only 3% of kids receive less than a dollar. (NOTE: You’ll need to have several Tooth Fairy quarters handy.} In 2012, the going payout rate was $3; that amount rose to $3.70 in 2013.

Smart parents will make the loss of a baby tooth and the Tooth Fairy’s visit a teaching moment. Some tell their kids that the Tooth Fairy pays more for healthy teeth than decayed ones, so brush up! Others go so far as to leave notes from the Tooth Fairy in addition to the money or treat giving instructions on good dental care.

Whether you believe in or play the Tooth Fairy, it’s great to have a positive and fun way to observe a growth milestone in a child’s life. Sure the Tooth Fairy is fantasy, but how boring would our lives be without a little fantasy? In a world full of bad news, happy stories can often be scarce as hen’s teeth. A smile on a child’s face when he finds money under his pillow from the Tooth Fairy is a heartwarming reality stemming from a harmless fantasy story.

One thought on “The Tooth Fairy–A False Tooth Story?”