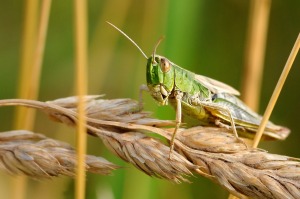 Just when you thought things had gotten as bad as they could in 2020, the year’s evil takes flight–literally. Now the unfortunate events of 2020 have been elevated to Biblical proportions with plagues of swarming locusts appearing on the scene. Modern day Africans aren’t welcoming an insect onslaught any more than Pharaoh and the ancient Egyptians did when Moses was around. What’s the scoop on these ghastly grasshopper goings on?

Lost in the 2020 bad news of the coronavirus pandemic, devastating wildfires, and social unrest is the story of billions (that’s billions with a “b”) of desert locusts who have been affecting East Africa for months. Swarms can grow so big  they could cover New York City more than once and can be traced via satellite images. (Note to any locusts who are reading: The Big Apple is just a nickname; you can’t eat skyscrapers!) Kenya’s agriculture minister reports that the largest locust swarm to hit that country earlier this year was made up of 200 BILLION locusts and measured 2,400 square kilometers.

Swarms ravage agriculture and devour pretty much everything in sight. Holy hungry hordes of hoppers, Batman! A locust swarm is capable of eating enough food to feed 2,500 people a day. The agricultural devastation caused by these locusts has resulted in food insecurity for millions of Africans and threatened the livelihood of 10% of the world’s population.

Growing up I remember being encouraged to donate to relieve hunger for starving children in Africa. Today, however, thanks to the locusts, it’s not just children who are starving. At the beginning of September over 10 million people in the Eastern African region were experiencing “acute food insecurity.” (Translation for us common folk? They’re starving.) This “acute food insecurity” is the result of  locust plagues which have ravaged enormous fields of food crops.

So, other than the obvious (being a destructive creature), what’s a locust? It’s a large  grasshopper that swarms on all continents except Antarctica; North America and Antarctica are the only two continents with no native species. These insects are short-horned grasshoppers (who even knew grasshoppers had horns?) between 0.5 and 3 inches in size weighing about 0.7 ounces. Besides horns, they also have teeth. All the better to ravage crops with, of course. Locusts are capable of rapid reproduction and can increase their population by twenty times in three months. Time for some locust birth control!

Locusts are ravenous eaters, so don’t invite one over for dinner unless you want to be eaten out of house and home. A locust can eat its body weight in vegetation every day. Sure, a locust is a tiny little beastie, but when millions of them swarm, they can destroy 300 million pounds of crops in a single day. Oh, and when their food runs out they turn cannibal. Eww!

Other than being destructive, locusts are best known for their swarming. Actually, swarming is just the grasshopper “going through a phase.” This phase, known as the gregarious phase, occurs when environmental conditions are just right, usually when there has been a drought followed by lots of rainfall and moisture causing rapid vegetation growth. At this point the locusts change color and experience body growth. Sounds like the insect version of the Hulk! The locusts, typically solitary creatures, also become attracted to one another and form swarms.

Making them even more dangerous is the fact that locusts are powerful fliers. They can migrate from place to place to wreak their agricultural destruction. Even more unnerving is their ability to travel great distances; they can cover over 81 miles a day. These flying creatures can remain airborne for long periods even traveling nonstop across bodies of water such as the Red Sea, which measures 186 miles. In 1988 a locust swarm flew from West Africa to the Caribbean (more than 3,100 miles) in just 10 days. Maybe they were just seeking a tropical vacation after all that hard work of ravaging African agriculture.

The locusts’ ability to travel should make Americans nervous. Currently, North America has no regularly swarming locusts. Nevertheless, locusts do have history here. High Plains locust swarms reached plague proportions in the American Midwest in the 1930’s during the Dust Bowl. Thankfully,  the Rocky Mountain locust became extinct in 1902. But if locusts can make it from Africa to the Caribbean, the U.S. could be the next landing target. These insects may tire of tropical beaches and want to check out Disneyworld. Desert locust from Africa are illegal immigrants who have no business entering the U.S.!

How do you get rid of locusts? The use of pesticides has been the most effective weapon against them. But I have a another suggestion. Let’s eat those grasshoppers up! Yes, these insects are edible and even considered a delicacy in many countries. Yuk! John the Baptist dined on locusts and wild honey while abiding in the wilderness. Why not expand your dinner menu and add some Cambodian peanut stuffed locusts to your family’s plate? Eating locust would kill two birds with one stone; we’d get rid of locusts and have food for those suffering from “food insecurity.”

Unfortunately, I expect it’ll be difficult to get rid of locusts who have been around since ancient times. How do we know that? Ancient Egyptians carved locusts in their tombs. Um, no. My idea of heaven is not having my earthly remains watched over by locusts. And who could forget the starring role locusts played in Exodus? Summoned by Moses, they produced a devastating plague in Egypt which darkened the land and stripped it of vegetation. This destruction helped to convince Pharaoh (at least temporarily) to let Moses’ people go.

And the more things change, the more they stay the same. Sure it’s 2020, but we’re facing the same threat that the ancient Egyptians did–just on a bigger scale. The desert locust is now threatening one-fifth of the Earth’s land and one-tenth of the global population in over 60 countries. The future outlook is not bright either. Experts are worried that locust plagues will worsen in warming weather. Think climate change.

Sometimes ignorance is bliss. With all that’s going on in the world, did we really need to add locusts plagues to the list of disasters facing us?  Locust plagues raise the evils of 2020 to Biblical proportions.But turning a blind eye to this plague simply allows the problem to continue and grow. Will millions more locusts in the world help? NO! We need to hop to it and get a vaccine for COVID-19 and a silver bullet to get rid of locusts.

Were you aware locust plagues are occurring in Africa? Would you eat a locust if prepared in a “tasty” dish? Where do locust plagues rank in terms of world issues? How serious an issue is “food insecurity”?